I got up late. No rush, my flight doesn’t leave until after 9:00 p.m. tonight. I decided to take a big risk and carry on all my tools as carry-on luggage. I suspect I will be scrutinized and looked over quite closely by security. I’m grossly overweight and am going to have to pay additional baggage fees. Anything over 90 lbs costs me $15/Kg or 2.2lbs. Just think if I’m 50 lbs overweight. That’s not a pretty picture. I was checking out of the hotel at noon and told the desk that I was departing on a international flight and they said I could stay in my room till 5:00 p.m. Of course for another additional fee. To be continued…………………………….
DaveR at 7:00 PM No comments: 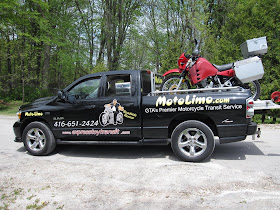 I got up, took a shower and got ready to have my gear and motorcycle transported to AIR TRANSAT. Motolimo was scheduled to arrive at 12 p.m.. So I had everything ready to go and Roy the driver arrives 15 minutes early. When he gets out of the Dodge truck I could have sworen Paul Tupper just stepped out. He had Paul nailed down to a tee except his face was different. I jumped in the truck and we went down to my cabin to pick up my bags and Roy says "you got all that on that Kawasaki?" I said yes and I knew I was over-packed when I included the extra rear tire. I put everything into his crew cab and we went back and loaded the red beauty. He was genuinely impressed with how my bike looked. While he off-loaded the pallet from his truck I took the cover off and packed it away. I then rolled it onto the pallet and locked it in the front wheel stanchion. We then pulled it down with four hold down straps. With everything looking good and a push of a button, the pallet was pulled into the back of the truck, ready for transport. I took a few pictures of my bike sitting on the truck before we departed for the airport. We made good time getting there. It was a big help that I knew exactly where to go once we entered the airport. We were on the inside of the runway and you could watch all the airplanes land. Anyway, once there I jumped out of the truck and told Roy to wait until I got back. I also told him I didn’t know how long this would take and asked him not to leave. Once I got inside the paperwork went pretty fast: maybe 10-15 minutes and then they told me bring in my bike. Roy backed his truck up the ramp into the warehouse and we unloaded the bike inside. The guys driving forks trucks and moving freight were pretty impressed with how the motorcycle unloaded out of the box. We removed the tie down straps and rolled the bike off the pallet. They told me to roll the bike on the scale to weigh it. I held my breath that I didn’t go over 235 Kg. It weighed in at 210 Kg/462 Lbs well under estimated weight so I didn’t have to pay any additional shipping charges. I got one more shipping document from the supervisor and then Roy drove me to the Radisson Suite Hotel Toronto Airport. I checked in and headed to the room. Oh, what a nice room. Guess what I did next? I pulled out my computer and started to update my journal. It was a few day behind.
DaveR at 6:59 PM No comments:

There were three things I needed to get done today: 1) fill out the paperwork for AIR TRANSAT, 2) Change the oil in my motorcycle, 3) Unload the bike and 4) Put everything into my bags to ship everything to London. The KOA staff was really helpful and let me get away with a few sins that normally aren’t allowed most campgrounds. I cut a deal with them: if they let me change my oil I would give them about four gallons of gasoline. They bought into it and let me keep my motorcycle in their shed overnight after I worked on it. The toughest part about the whole day was unloading the motorcycle and putting all my gear/stuff into two bags for flight to London. That almost took me four hours. Keeping track of everything seems to be the biggest issue. Then I sat down and tackled the shipping paperwork. They mostly wanted then shipper's name and address – shipping destination, address and telephone number. The last thing they wanted was the weight, length, width and height of the motorcycle. That had me surfing the internet for dry weight of the bike less saddle bags/panniers and top box. I found it. Then I remembered "oh crap I sent all that info to Motorcycle Express when they were processing the air bill". The weight I sent Motorcycle Express was 205 Kg/451 lbs and when I checked the air bill my shipping weight was list as 235 Kg/517 lbs. Anything over 517 lbs I would have to pay extra. And EXTRA is a word I’m hearing way too much of in most of my conversations. Feeling relieved I wasn’t going to have to pay an add-on fee, I went to bed.
DaveR at 6:59 PM No comments:

I got up and decided to stay another two days at the KOA. Then I decided to find my motorcycle drop off point for real. I was shipping my motorcycle with AIR TRANSAT and sure didn’t know what to expect. The address is: CAS Canada Inc. – GTAA (Cargo West – Infield) – 2710 Britannia Road East - Building 2 – Entrance 5 – Mississauga, Ontario. I followed the directions and found it fairly easy. I also met some of the staff who were friendly, and as friendly gesture gave me some more papers to fill out. I said "oh no, not more paper work!" I took it back to the campground and left it lay. I also stopped at Walmart and picked some luggage tags, stopped at a hardware store picked up a hose clamp that had broken on my black storage tube. I also washed the bike. I was told to have a clean bike before shipping and later found out that it wasn’t that big of a requirement. One of guys who worked in shipping said they shipped bikes covered in mud. I just rolled my eyes.
DaveR at 6:58 PM No comments:

I left Port Huron and crossed the Canadian border at Sarnia. I stopped for gas just before crossing, and when I paid for the gas I asked the lady behind the counter how friendly the border officials were and she suggested I don’t sass them. Duh. Of course it was raining, so when the border guard asked for my passport I had to dig through four layers to get to it. He asked me if I was carrying any cigarettes, weapons or drugs. I said, no, and that I was traveling around the world on my motorcycle and couldn’t afford to have problems with customs personnel. He gave me a bewildered look and waved me on. I stopped by the Canadian currency shop and picked up some Canadian money. From there I rode to London, Ontario on Hwy 402 and then on to Toronto, Ontario. I stayed in the Campbellville KOA about 25 minutes west of Toronto’s Pearson International Airport. When I arrived at the KOA it was pouring rain and miserable. I couldn’t open up my packs for fear of rain getting in and dampening my clothes and getting into my paperwork. So I rented a cabin, unloaded my bike and got out of the rain. I used the KOA computer to look up the directions to my motorcycle drop off location. The computer was incredibly slow and the KOA lady behind the counter helped me out. We eventually downloaded the directions. One of the side effects of riding in the rain, especially when it’s warm out, is you perspire inside of the rainsuit. Depending how long that goes on you get the wet dog smell going on and I smelled liked a wet dog. I could smell myself. I was hoping not to offend the KOA lady while she was looking over my shoulder. My plan was to find this drop off location so when it came time to drop off the red beauty, no problems would be encountered. I also had to make arrangements to haul my motorcycle to AIT TRANSAT. I was checking out a Kawasaki Dealership and found this business, MotoLimo.com which specializes in hauling motorcycles. So I rang him up and made arrangements. I didn’t care for his price but he could haul the bike if it was raining out. That was a big selling point with me.
DaveR at 6:56 PM No comments: 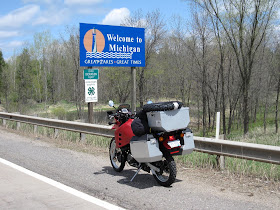 I packed up my bike and left. I rode south on I75 to Flint, Michigan and then east on I69 to Port Huron and camped that night at Port Huron KOA. I stayed in a camping cabin because it was raining and also wanted to use my laptop. All the KOA’s have WiFi which is handy. The Wifi didn’t work so well because it had too weak of a signal. Anyway, I found the info I needed.
DaveR at 6:56 PM No comments:

I repacked all my wet clothes that had dried, loaded my bike, filled up with gas and left Wausau. I rode up I39/Hwy 51 to Hwy 8 east to Pembine and then north to Hwy 2 to Mackinaw City, Michigan. The Mackinaw Bridge is having some bridge repair work done on it. They're repairing the two southbound lanes, so getting across the bridge was slow. The southbound lane I rode in had the steel grating and my red beauty wobbled and snaked across it. I white-knuckled it all the way across the grating. After getting across the bridge I found the KOA Campground and camped there for the night. It was great to sleep in my tent again. The owner came over to help me set up my tent and told me his hunting dog was ill with mental issues and had to be put down. So he was a little unhappy.
DaveR at 6:55 PM No comments: 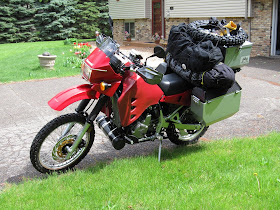 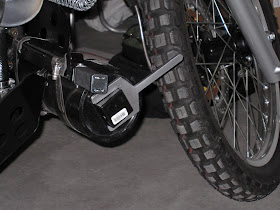 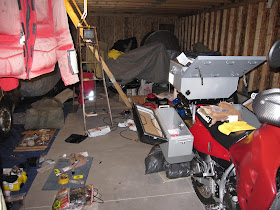 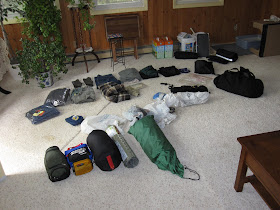 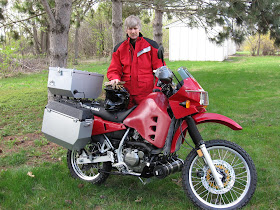 Present departure date 11 May 2009. Am presently compiling paperwork required for the RTW (Round the World) trip and loading bike.
DaveR at 10:29 AM No comments:
‹
Home
View web version